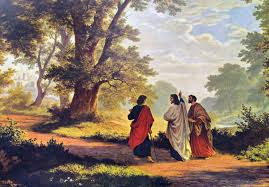 Thy kingdom come. Thy will be done in earth, as it is in heaven. Matthew 6:10

Two men, so recently filled with joyous expectation for a brilliant future, commiserated over their shredded dreams.  A stranger joined them as they walked and enquired about their sorrow.  How could he have been so ignorant of the grief they shared?  As the stranger reflected on their shared history and what had been predicted from ancient times, hope was rekindled, and spirits seemed to rise above raw emotion.  When the stranger gave thanks over the bread broken for lunch, they knew he was Jesus.

This past year, 2020, has been a great international leveler.  Not one country has escaped the Corona virus; all have suffered.  In our country, we were experiencing unprecedented economic prosperity and growth; joblessness was at a record low; opportunities seemed to be limitless.  We were barely into the new year when the virus struck a blow that upended the whole world.  And it changed our lives.

Those men who walked along Emmaus Road bowed down with grief probably shared thoughts of what had been their dreams for the future:  emancipation from Roman rule; a house and farm for everyone; a renewal of David’s Kingdom.  Their world crashed when their Messiah was crucified.  Were they walking away from their sorrow?  Was their journey an attempt at discernment?  God saw and sent Jesus.

Why THOSE two men?  There were so many others suffering.  But they were chosen to hear the words of hope, to have their eyes opened.  Somehow, the God “to whom all hearts are open, all desires known, and from whom no secrets are hid” saw two lonely men walking out their despair and came to speak Truth to them.  God had won victory over death and was announcing the Kingdom that would bring about a revolution greater than anything they had ever thought or imagined.  And, as they listened, their hearts burned within them.

We’re walking into a new year.  Perhaps the old one symbolized the death of many things, but now the Kingdom has come.  This is a year of possibility and we can live into the reign of our Lord as we rekindle our faith in his faithfulness.  As we open our eyes.  As we welcome his rule in 2021.

Father, we welcome you as Lord and trust you to renew us and fill us again with your Spirit and presence.  Thy Kingdom come; thy will be done.  AMEN.